The first time I nursed for Implants, I was terrified! I felt completely out of my depth; how could I ever remember all the instruments, let alone how to set up the room correctly? The patient had complete upper and lower dentures and was having mini dental implants in the lower jaw to retain the lower denture.

That was a while ago, and I have now been working with an Implantologist and another implant nurse who both have years’ worth of experience. Patients who have been told they are a difficult case, or implants can’t be done, travel to the practice we work for. 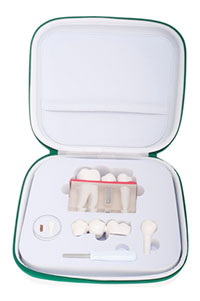 We had a patient visit us who had researched implant treatment and had visited a few practices, this patient required full upper and lower clearance, so he had a couple of options as to what treatment he could have. Implants with fixed bridge work, implant retained dentures or conventional upper and lower dentures. This patient could not stand having any palatal coverage due to a high gag reflex, so that ruled out the conventional denture option. After a few consultations, the patient decided to have fixed upper and lower bridges on implants. Due to insufficient bone in the upper jaw, the patient required sinus grafts on both sides and a lower ridge split. Temporary bridges were to be fitted on the day the implants were placed. The patient was obviously anxious so sedation was booked for the placement appointment. Even with the sedation, the patient did not wish to have the upper and lower treatment carried out at the same time. Due to bone density upper implants require a 6 month healing period, whereas the lower jaw only requires 3 months.

Sinus grafts involve making a window in the bone by the sinus, bone will then be added under the sinus to lift it out of the way, therefore making it possible to place an implant in an area that previously did not have the bone available. A tricky procedure at the best of times, but even more complicated when the patient is under sedation. Every patient is different with sedation, but this patient was relaxed enough to fall asleep, but determined to keep this mouth shut. We had to keep waking him up and practically reason with him as to why he needed to keep his mouth open, in the end we used mouth-props, but of course these were in the way when we needed to work on the sinus areas. The Implantologist worked on the sinus grafts first, so made an incision in the gums and exposed the bone. A window was made, whilst keeping the sinus membrane intact, the bone was added. The bone we prefer to use is Donor bone, the reason for this is that the bone is human, and so has a higher success rate. If patients are adverse to this, then other bone is available. Either from a special breed of cow or pig. Our patient was happy to have Donor bone so this was used. The implants were placed and the correct abutments were fitted, as to allow for the temporary bridge to be fitted. We had the temporary bridge already constructed from a previous wax up impression, but this was still the part of the appointment that took the longest.

After sinus grafts, patient’s need to be aware that any unnecessary pressure in the sinus areas can affect the bone graft, therefore have to follow some rules. If they sneeze, then they need to keep their mouth open, do not blow their nose, do not drink using a straw and no flights. All these rules apply for at least 2 weeks, but longer is preferable. We went through these with the patient but also to his relative who was taking him home, and we gave written instructions as well. We always follow up with patients the day after placements, and my colleague spoke with this particular patient. He was taking painkillers at the regular intervals and felt a little swollen but otherwise he was feeling well. We reviewed a week later. Even with the use of PRGF, the patient still had bruising around the eyes but he had taken our advice and started to take arnica to help improve this.

3months later, he was back for the lower treatment, again this procedure was carried out under sedation. Ridge split is exactly as it sounds, the width of bone is insufficient for the implants, so therefore is split, the implant placed and bone packed in the area. The patient was told to be careful with his temporary bridges, even though they are fixed a soft diet is required while he is healing. We recommend a diet full of eggs, pasta, fish, rice etc. Apparently this patient was being careful, even so he returned 2-3 times to have the temporary bridges repaired. This patient is now having the permanent bridges constructed. Even though he had to endure x2 sinus grafts and lower ridge split, he says that he is pleased that he has had treatment.

Nursing for implants is something I enjoy, even after I have been leaning over a patient for 2-3 hours. I find it fascinating, especially the complex treatments. It is amazing what the human body can endure and how quickly it heals afterwards.