As dental nurses, we find ourselves in a prime position to seek information on the general health and habits of our patients - many of our patients actually visit the dental practice more often than they visit their GPs.In addition to completing comprehensive medical histories, all patients should be asked about their smoking status and alcohol consumption.

This gives us the perfect opportunity to provide advice and encouragement for smoking cessation, which is defined as the process of discontinuing smoking tobacco, either with or without the assistance of standard programmes.

While this drastic reduction in smoking is good news, there are still ten million adults in Great Britain who are smokers. A 2012 survey  highlighted smoking as ‘markedly higher in the lower socio-economic groups’. In addition, it noted that two thirds of smokers started smoking before they were 18 years old, and estimated that more than 200,000 children aged 11-15 had started smoking.

The above statistics show that there are still significant challenges for professionals to address - the task of encouraging, educating and assisting people in Smoking Cessation Programmes is still very important.

Why do people choose to smoke?

The reasons that people choose to start smoking have always been a topic of debate. Recent statistics increasingly point to peer pressure as being a significant reason. Often people have individual reasons, and are happy to tell us that they didn’t actually like the taste and sensation of their first smoke inhalation. However, there is little need to discuss the reasons why people continue to smoke; this is due to addiction to nicotine. This is confirmed by the fact that 60% of smokers said they would find it difficult to go a day without smoking, and by the fact that many individuals do not actually like the fact that they are smokers – 63% of smokers actually want to give up. Addiction to nicotine plays such a part in the lives of 20-a-day smokers that 35% of them smoke within five minutes of waking. The reasons that people continue to smoke can be condensed into two main categories: habit and addiction.

What is a cigarette?

Cigarettes appear deceptively simple, consisting of paper tubes containing chopped up tobacco and a filter at the mouth end. However, they are highly engineered products, designed to deliver a steady dose of nicotine.

A cigarette is a complex compound of approximately 4000 chemicals made up of tiny particles and gases – these include carbon monoxide, arsenic, formaldehyde, cyanide, benzene, toluene and acrolein. As a by-product of burning this compound, gases are released which are known to cause cancer. Additives are used to make tobacco products more acceptable. These include humectants to prolong shelf-life, sugars to make the smoke seem milder and easier to inhale, and flavourings such as chocolate and vanilla.  Nicotine is an extremely powerful drug. The Royal College of Physicians has indicated that the way in which nicotine causes addiction is similar to that of drugs such as heroin and cocaine. This may explain why it is estimated that it can take an individual at least five attempts to give up smoking before they actually do so.

Smoking is the primary cause of preventable illness and premature death, accounting for approximately 100,000 deaths each year in the UK. Smoking harms nearly every organ of the body and dramatically reduces both quality of life and life expectancy.

Smoking causes 80% of lung cancers, 80% of respiratory diseases (for example, bronchitis and emphysema) and 17% of heart disease-related deaths, as well as numerous cancers in other organs including the lip, mouth, throat, bladder, kidney, stomach, liver and cervix.  On average, smokers die ten years younger than non-smokers.

Women who smoke are estimated to go through the menopause two years earlier than they otherwise would, and are at greater risk of osteoporosis. For men, smoking is associated with an increase in sperm abnormalities, which affects fertility and causes impotence.

Halitosis and stained teeth are perhaps the most obvious (and most complained-of) effects of smoking.

Tobacco use increases the risk of periodontitis, which results in swollen gums and bad breath, and long-term effects include tooth loss. Smoking may be responsible for 40% of chronic periodontitis cases among adults, and smokers tend to respond more poorly to treatment.

How smoking affects the brain

Once inhalation of cigarette smoke has taken place, nicotine is quickly absorbed into the lungs. Through the gaseous exchange process, it enters tiny blood vessels. From these blood vessels, the nicotine enters the bloodstream and travels directly to the brain. Nicotine can also enter the bloodstream through the mouth when tobacco is chewed, and can enter through the skin. This powerful drug reaches the brain within ten seconds, and produces almost instant feelings of pleasure and addiction gratification, amongst other stimulating effects.

Once in the brain, nicotine binds to acetylcholine receptors in the brain and mimics them. Acetylcholine receptors are involved with muscle movement, breathing, heart rate, learning and memory. They also release other neurotransmitters and hormones that affect mood, appetite and memory. These feelings make people want to use tobacco over and over again.

Nicotine does not stay in the body for very long, and is broken down quickly. In around 20 to 40 minutes, the nicotine loses half of its effect, and the smoker will soon feel the need to light up another cigarette. 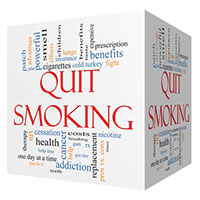 Addiction to and dependence on nicotine

Addiction to nicotine causes dependence. The unpleasant effects of withdrawal mean that people are unable to stop using the substance, even if they would like to and understand that it is causing them harm. Levels of addiction to nicotine vary from smoker to smoker. However, usually the longer the person has smoked and the more frequently a person smokes, the higher the dependence will be.

As well as causing dependence, smoking can become habitual. Smokers will often have a pattern to their smoking; for example, they may smoke first thing in the morning with their coffee, after a meal, during a regular work break or when socializing. These are trigger situations and as well as overcoming the addiction, smokers have to break habits – this is no easy task.

Giving up – stresses and side effects

It often takes individuals several attempts to give up smoking before they succeed and become ex-smokers. Some of the withdrawal symptoms are extremely unpleasant, and it is a very difficult task.

Support and understanding from family and friends is of paramount importance due to the emotional side-effects of smoking cessation. These side-effects include the intense desire to smoke (as the brain starts to miss the nicotine fix), mood swings, poor concentration and irritability. These are all major contributing factors to failure in smoking cessation.

Common physical side effects include:

• coughing – this is the body’s attempt to protect the lungs and rid them of tar, and usually subsides fairly quickly.

• hunger – this is caused by changes in metabolism. Food will also taste better, and weight gain is therefore almost a certainty in people who give up smoking.

• constipation and diarrhoea – these are due to changes in the digestive system.

• bleeding gums – smoking causes capillaries in the gingiva to have the blood supply reduced or completely cut off. When smoking is stopped, normal function is restored. Oral health education is required at this point.

• trouble with sleeping – this is due to nicotine leaving the body, and can last for two to three weeks.

• dizziness – this is due to more oxygen reaching the brain, and is normally short-lived.

While the physical and emotional withdrawal symptoms are intense, many of them do pass fairly quickly and they are signs that the body is restoring itself to normal, healthy functioning.

There is no replacement for will power. In order to succeed, the smoker must have decided to give up, and must be prepared for all of the withdrawal symptoms. Local health authorities usually run smoking cessation programmes through GP practices and pharmacies. Groups are often specially set up in local centres, and there are Help2Quit advisors who carry out home visits.  All provide support and information in assisting cessation.

In addition to providing support and advice on coping strategies, these sources of help are able to discuss and assist in arranging medications which can help with the physical effects of withdrawal. The pharmaceutical assistance of cessation falls into two categories.

Category 1 – Medications: There are two medications available on prescription. These both involve a slow-release formula that dampens the urge to smoke.

The first is Zyban, a type of antidepressant first used for returning soldiers who were traumatised after the Vietnam  War in the 1960s. It was discovered that the soldiers’ desire to smoke was diminished and that withdrawal effects were much reduced. This is less commonly used now with the development of the second available medication, Varenicline.

Champix (Varenicline) is the only medication to be researched, developed and licensed for the purpose of smoking cessation. It is now the preferred medication, as it has fewer side effects and a lower level of contraindications with other medications. This medication has been found to have a profound effect on some people, with patients reporting even the smell of smoke making them feel nauseous.

Category 2 – Nicotine Replacement Therapies (NRTs): These are available on prescription, and can also be bought over the counter in pharmacies.

There are several types of NRT, including nicotine patches, gum, microtabs, inhalers, lozenges, nasal sprays and quickmists. These all come in various strengths and release speeds to ensure the craving and desire to smoke are overcome. Research by companies continues, and new NRTs are in constant development.

Often a Category 1 medication will be used in the first weeks and months of cessation; this will relate to the level of dependency. As dependence on medication declines, NRTs can be used to provide a quick response when people feel the overwhelming need to smoke.

The health benefits of smoking cessation

The health benefits of stopping smoking can start after just 20 minutes. Blood pressure and pulse return to normal, and circulation starts to improve in the hands and feet. After eight hours, nicotine and carbon monoxide levels reduce, and oxygen levels increase. After 24 hours, carbon monoxide will be eliminated from the lungs, which will start to clear any mucus - a common sign at this stage is coughing. After 48 hours, the body becomes nicotine-free, and the senses of taste and smell start to improve - an increased appetite may be a feature of this stage. After 72 hours, breathing is markedly easier, and circulatory improvement makes moving around and exercise much easier. After five years, the chance of having a heart attack is halved compared to smokers. After ten years, the chance of getting lung cancer is halved compared to smokers, and the chance of heart attack is the same as someone who has never smoked.

This article has looked at several aspects of smoking cessation. With continued research, evidence, support measures and education, becoming a smoke-free nation should be achievable. As health professionals, we should all be aware of these issues and work together to achieve this.

A fantastic resource to read is the Department of Health Guidance Booklet: Smokefree and smiling!

Miranda is a Registered Dental Nurse with the following qualifications: